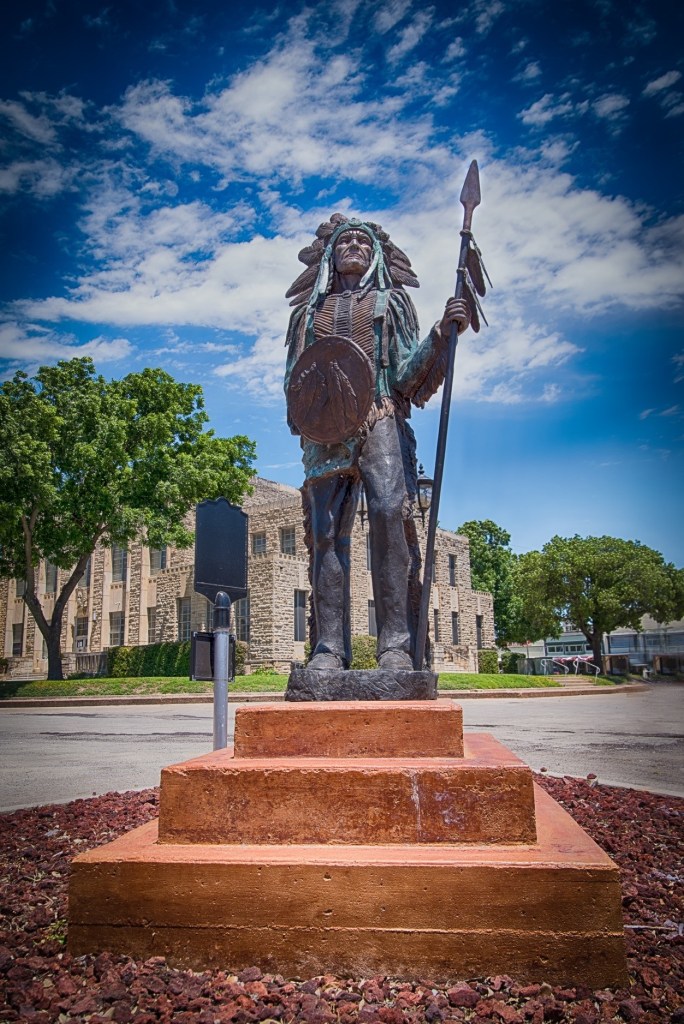 Most who come upon it know that the name Comanche comes from the tribe of natives who once occupied the land, although few would be able to tell you just where the name Comanche comes from. In a town full of so many friendly faces it comes to be a bit ironic that the name comes from the Ute tribes word “kimantsi”, which translates to “enemy” or “stranger” (the former word being what the Comanches were to the Ute’s for many years). The Comanche tribe called themselves “numinu”, their word for people.

Today the residents of Comanche County work hard to preserve their history, and it shows. This article will serve as a virtual tour, showcasing a handful of the counties’ many historical markers, as well as a few of its more interesting historical details.

It would be hard to discuss the history of the county without first mentioning the counties’ robust museum. 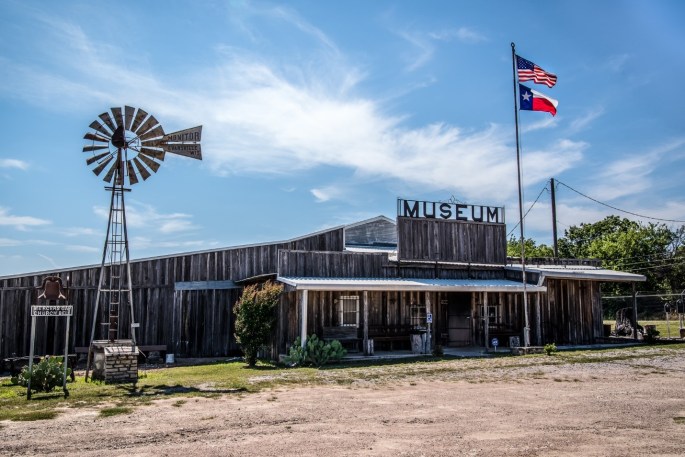 This museum boasts over 30,000 square feet of history, featuring artifacts ranging back over 150 years. The staff at the museum has worked tirelessly to categorize the areas rich history, with rooms dedicated to historical periods, military heroes, and the communities that makeup the county. 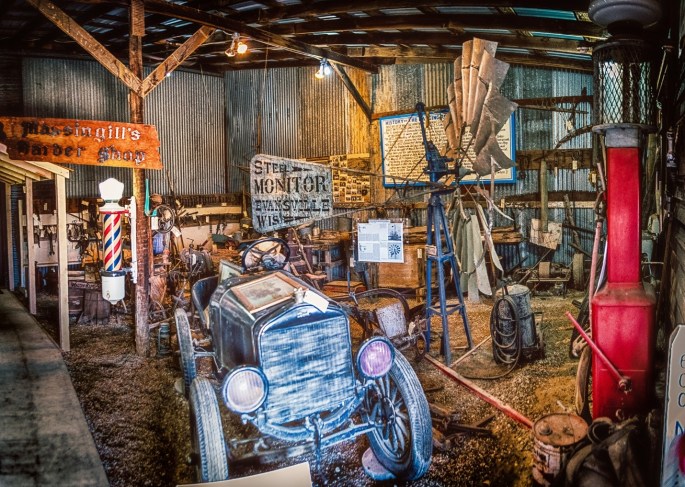 As soon as you walk through the front entrance there are relics to examine, from blacksmithing tools and farm implements to an old Model T. This front open-air addition also features a Barber Shop scene before leading into a large and air-conditioned (important in the Texas heat) main building.

Here you will find a giftshop, as well as a welcoming and informative staff. It quickly becomes apparent how much work has been put into making this counties history more accessible. This is a place to be experienced, and worth an article on its own. In the photo above you can see the massive flint display, featuring arrowheads of all shapes and sizes, spearheads, atlatl projectiles and myriad native tools (some you can even touch!).

There’s a room dedicated to the scene of the infamous John Wesley Hardin and his murder of Brown County Deputy John Webb (of which there’s an article about on this site). There are also books about the events surrounding the murder, as well as a wall of photos and paintings of the men involved. The staircase from the courthouse where the case was heard is also found in the museum. Outside you’ll find the base of the oak tree his brother and kin were hanged from in the aftermath of the shooting.

You’ll also find dioramas of the Jack Wright Saloon and a Native American campsite. There’s a room dedicated to saluting our veterans, with uniforms from bygone eras as well as weapons and stories of the veterans that called Comanche County home. There’s a room featuring vintage doll houses, as well as many rooms explaining the histories of the many communities in the area. Geodes and petrified wood pair with an exhibit detailing the life of famed geologist Robert T. Hill. 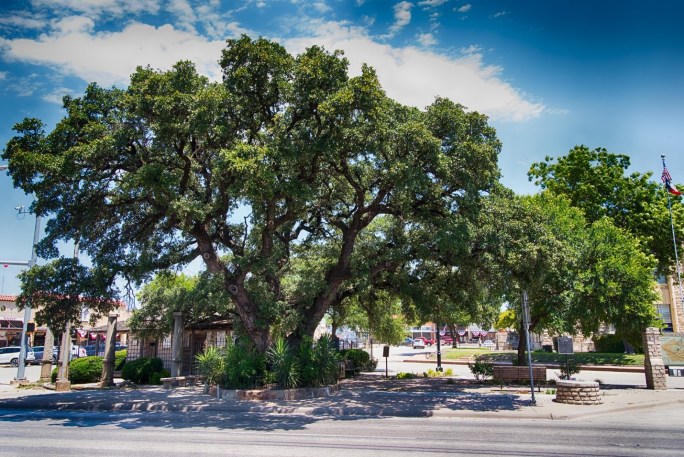 Heading back into town from the museum you’ll find the city square. The square is steeped in Texas history. You’ll find nearly a dozen historical markers, the oldest log-cabin courthouse in Texas, a guided audio tour, as well as memorials to veterans of law enforcement and war. The oak in the photo above is the Fleming Oak, a storied tree that’s been preserved through care and sheer shotgun stubbornness. 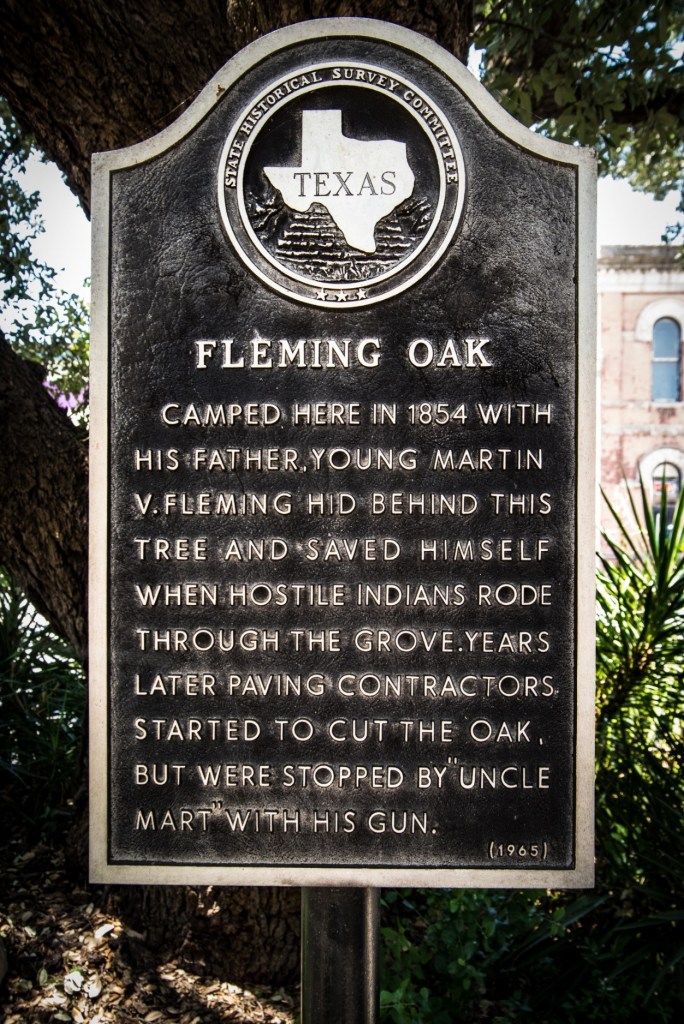 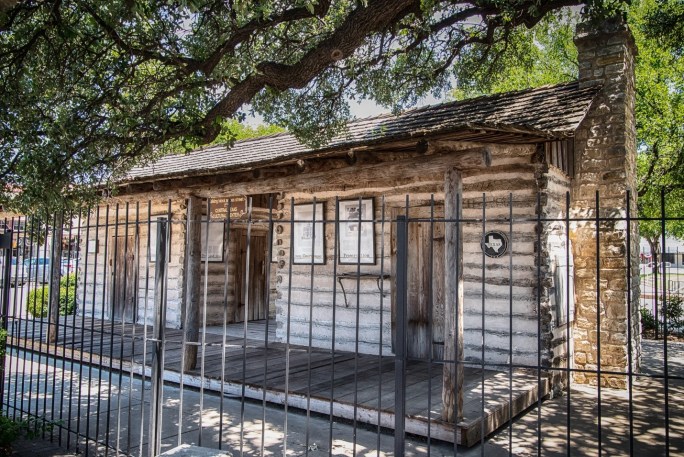 In the areas adjacent to the new and old courthouse you’ll find a guide to the many attractions in the city, as well as many shops and highly regarded restaurants. Many of these establishments rest in buildings that have served the community for over a century, with many stories to be told. It’s a perfect place to spend an afternoon and evening.