This week, we are picking up where we left off with “Texas History You Need To Know, Part 2.” This article will begin with the Robert Thomas Hill Historical Marker:

Although briefly mentioned when speaking of the museum, I’d be remiss if I didn’t give Robert Thomas Hill and the history of geology in Comanche County a bit more light. Being a state steeped in oil, geology is a field of interest for many Texans. A man considered the father of Geology in our state made his first forays into the field while living in the little frontier town of Comanche. His tale of coming to join his brother in Comanche and the events that detailed his life would make for an enthralling Hollywood biopic. He was first employed with his brother at the local paper, The Comanche Chief. They soon became co-editors, until 1882 when Robert found his way to Cornell University – at the behest of his friend the local barber.

The paper is the oldest business in the county, and one of the longest running papers in the state. Robert thrived in the world of words, as he was a man with an insatiable thirst for knowledge, as well as a curiosity all Texans owe for the knowledge it produced. He started his explorations on the local hilltop known as Round Mountain, and when he died his ashes were scattered there. The little mountain has history of its own, becoming the hiding place of John Wesley Hardin in 1874. 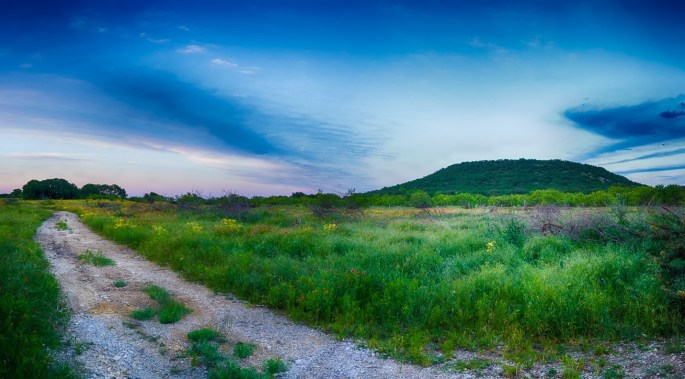 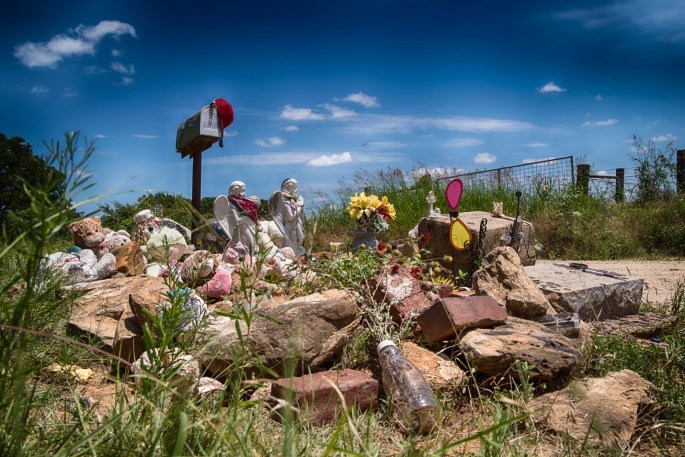 Heading northward from town on a single lane dirt road you’ll find a memorial. This memorial has been kept and guarded since the 1870’s, for over a century it’s left many with more questions than answers. It sits just outside of the community of Sipe (pronounced Seep) Springs, a once bustling oil town.

Amongst an eclectic offering of toys, flowers, stuffed animals and hundreds of pennies lie two headstones. The older looking of the two poses a simple question: Who is the little girl? Age 3, 1870. It’s said that in 1870 a family was traveling this trail westward when their child fell from the wagon, dying from head injuries. There’s also speculation she died from disease. Whatever befell the girl, she rests here now. A few years later a cemetery was established just a few miles away, but the girl remained. This is a story that has haunted and intrigued generations, so much so that the tradition of adorning this little one’s grave site still exists.  Today you can visit and pay your respects, leaving a penny and a thought.

A few miles from the solemn marker of an unknown girl lie a brother and sister, the epitaph on their gravestones simply reading “Happy and gay, to school they went one day. But thank God they are not dead, Just away.” The two children that rest here were victims in one of the worst catastrophes in the history of Texas – the New London school explosion of 1937. New London was an area rich with the spoils of the oil boom that was taking place at the time – it was home to one of the wealthiest school districts in the nation. In 1932 a large school was constructed from steel and concrete, at the cost of 1$ million (closer to $18 million today). In the original design of the building there was to be a boiler and steam heating system installed in the large area beneath the school, the school board opting instead to install gas heaters throughout. A common practice of the time was for residents to tap into existing residue gas pipelines from the oilfield in order to take advantage of the natural gas that traveled through the pipes. This untreated gas was volatile, and odorless. A leak developed in the system, and before long the gas had filled the subterranean levels of the school. On the afternoon of March 18th, 1837 an instructor turned on an electric sander, igniting the gas. The reports of eyewitnesses record the walls of the school expanding, before the roof lifted from the building and collapsed upon itself. A two-ton piece of concrete was thrown 200 feet, smashing a nearby Chevrolet. The explosion was heard up to four miles away, alarming residents to head to the source of the sound. A massive rescue effort was undertaken, with Texas Rangers, the highway patrol, the Texas National Guard and even a local troop of Boy Scouts being summoned to the scene. At some point in the evening it began to rain, those involved in the rescue effort working tirelessly through it all. Seventeen hours later the site had been cleared. It’s estimated that there were over 600 people in the school that day and that only around 130 escaped without serious injury. Half of them did not survive. A young Walter Cronkite was called to the scene, later stating “I did nothing in my studies nor in my life to prepare me for a story of the magnitude of the New London tragedy, nor has any story since that awful day equaled it.” In the aftermath of the disaster the Texas Legislature began mandating that thiols be added to natural gas, the strong odor from which now makes leaks detectable.

Heading east from Sipe Springs you’ll find yourself in the second most populous city in the county, De Leon. This town has its own history as the peanut capital of the world, a crop turned to by local farmers after the drought and boll weevil devastation of the early 1900’s. This transformed the county from a cotton producing area to one of the largest producers of peanuts in the nation. 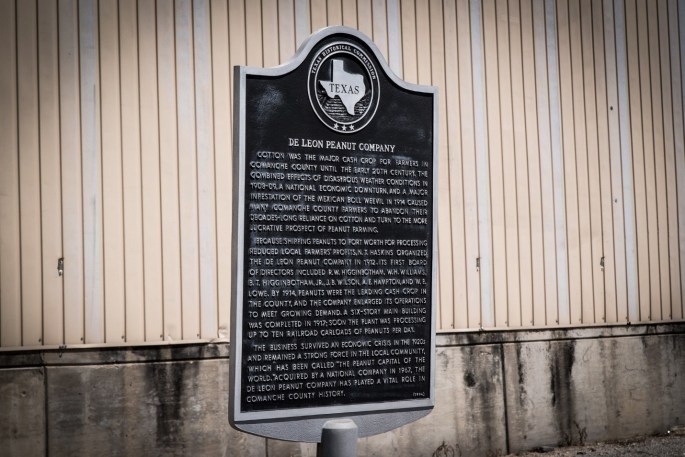 The town was also bolstered by the Texas Central Railroad, which due to the creation of the Peanut Company later became known as “The Peanut Line”. The depot was created and Texas Central laid out the town on April 10, 1882. The town became the primary shipping point for cotton before turning to the peanut crop.

Be sure to check this marker out next time you are in De Leon, Texas. Don’t forget to visit the Terrill Antique Car Museum or explore the downtown area as well where The Chaos Trading Company and The De Leon Area Historical Museum are located.

For Part 3, we are going to go from De Leon and head east and then south, to the community of Comyn.